The market of innovations has always been attractive not only for developers, implementers and innovators, but also for those who want to appear as personal gains. Innovative developments are not always clear to the consumer, and therefore, at first glance, it is difficult for a non-expert to distinguish a real quality product from a fake. Many new, truly useful ideas and the development of real scientists for too long go to the masses, and sometimes just die at the root. The enterprising manufacturers of counterfeit products begin to produce "analogs", whose properties do not correspond to the properties of the original product, but the lower price makes them more attractive in the eyes of the average person, which provides the widest demand.

Our products are no exception. Since the start of our production of our products, many of the manufacturers of "analogues", using unclean methods of competition, are trying to give their products for what they are not. For example, several manufacturers repeatedly attempted to use photographic materials made by us and our partners at sites where this or that material was used. After filing pre-trial claims, as a rule, such material was removed from the sites.

Often, our products are in the field of view of various media, causing interest on their part, and they cover information about it not as advertising. In cases when various TV channels shoot news and TV shows about our technologies, we, even as a producer, do not have copyrights to this publicistic material. In such cases, the purchase of products from us is made anonymously, and we will find out about this or that video or photo report when it has already been published in the media.

So, as an example, we can cite a video report from the Channel One news program about the visit (at the time of the President of the Russian Federation) D. A. Medvedev to Tatarstan (October 26, 2010), where he was shown our heat covering RE-THERM , which he subsequently spoke positively. This report does not demonstrate packaging with the product from which it was applied, does not name its brand, so many unscrupulous organizations boldly assert that it was their product that was applied to the pipe shown to the president. However, a photographic material was published on our website, proving the fact that the insulation of this pipe belongs to our enterprise.

You can find this photo material by clicking on the link http://inn-t.com/articles/item/11-fotootchet-s-teplovogo-uzla-poseshchaemogo-prezidentom-rf-d-a-medvedevym-v-naberezhnykh-chelnakh

In addition, on March 4, 2018, on the NTV channel in the “Chudo tehniki” program, in the “Chudo-tovary” section, a story was broadcast about testing a liquid thermal insulation coating. In this category, leading programs with the involvement of relevant institutions test various interesting products for compliance with one or another manufacturer-declared properties. During testing, the properties of the test specimen were fully confirmed. On the label pasted on the bucket with the product from which the application was made, the creators of the program stuck a small sticker covering the RE-THERM logo.

Despite the fact that in this video only a part of the label is stuck, and by the non-glued part you can easily identify the heat covering RE-THERM VERTICAL (and even if you want to see the date of its production, the batch number and other parameters), many of our competitors have posted this video in their official sites. At the same time, conscientious competitors placed this video in its original form and do not claim that we are talking about their product, and the more enterprising and unprincipled got to the point that they cut out part of the plot with the help of video editing tools, but in those fragments that were not cut out, applied the skill of computer graphics is akin to Hollywood. In the fragments, where on the screen the presenter makes application of the product from a bucket with a RE-THERM VERTICAL label, the label has been removed. Thus, the video is presented as if it was filmed about their product.

The original video can be seen in the archive of the program "Chudo tehniki" from March 4, 2018 on the official website following the link: http://chudo.tech/2018/03/04/chudo-tovary-pila-dlya-vsego-kraska-uteplitel/

These facts emphasize the high demand for our products and our honest name to consumers and partners, however, they often jeopardize the entire direction of such products, “analogs” of which begin to produce such parodists and video editors. After all, these craftsmen with the same ease can assimilate other people's results of research and testing, as well as carry out other simple manipulations not only with marketing, but also permissive and regulatory documentation. 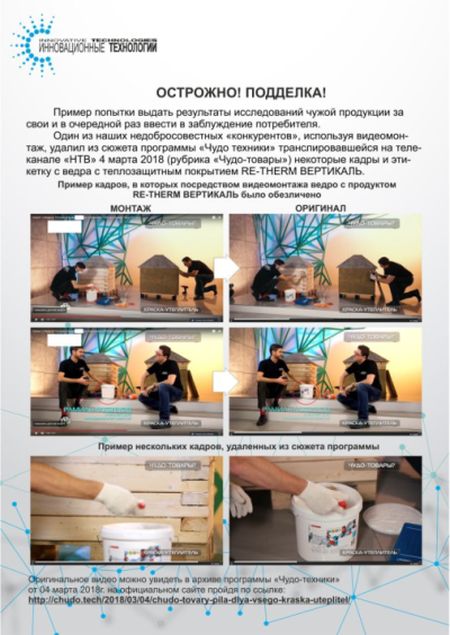 cently, we and representatives of our affiliate network have repeatedly revealed facts of falsification of RE-THERM products.

In this regard, LLC "Innovative technologies" as a protection against counterfeiting introduces new rules for labeling its products. All containers (buckets of any size except for test samples) of RE-THERM batches released from 14.02.2012 shall be marked with a holographic sticker. The sticker is on the label. In case the sticker is missing or damaged - please contact the manufacturer directly for information on your product batch. Most likely, you have a fake! 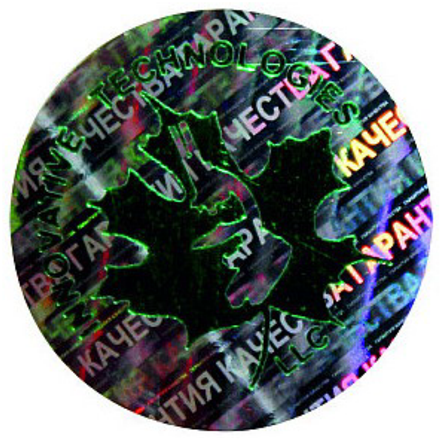 In addition, plastic buckets of 3, 10 and 20 liters are marked with special stickers, without breaking which opening the bucket is impossible. The sticker is as follows:

When trying to open the bucket, the inscription “Attention! Opened! ”: