The principle of operation SR-GLUE

That is, SR-GLUE is a pasty material supplied to the consumer in buckets of different volumes. It is applied to sheet materials from a special syringe that is easily pumped directly from the bucket. Reducing the sound permeability of enclosing structures using SR-GLUE is because the design transmits less energy to the air molecules than it came, due to the damping of most of it. 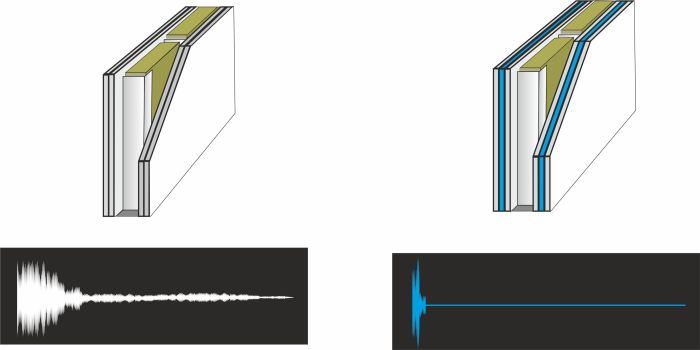 To put it simply, the principle of sound wave transmission between adjacent rooms is similar in its mechanism with sound recording through a microphone and its playback using a speaker. Sound is the vibrations of air molecules (sound does not propagate in a vacuum) which in turn vibrate all the objects with that they come into contact. For example, a microphone records sound waves by vibrating the membrane and transmitting these vibrations to an electromagnet that records these vibrations and transmits them as electrical impulses to a recording device. The reproducing device transmits these electrical impulses to an electromagnet that is tightly attached to the membrane of the sound reproducing speaker and it begins to vibrate with the same intensity and frequency as the microphone membrane. Thus, the sound can be transmitted, recorded, amplified, etc.

In the same way, there is a sound transmission between the rooms. Air molecules with a certain frequency and intensity "bombard" the enclosing structure that begins to produce micro-vibrations.

Vibrating, it drives the air molecules on the other side of itself, that is, the principle is the same as that of the microphone and the speaker at the same time. Therefore, the task of the sound insulation material is to extinguish and block the further transmission of energy (vibration) beyond the sound insulation circuit.

The principle of energy blocking in sound insulation SR-GLUE is fundamentally different from other sound insulation materials. Other materials, having a low weight and density, as well as a large number of cells, can only extinguish the sounds of medium and high frequencies (such sounds have less energy). Sound-insulating compound SR-GLUE, holding massive sheet materials that in this structure are membranes creates an effective sound barrier to reduce the penetration of sound waves of high energy.

Thus, the SR-GLUE compound, located between two layers of sheet material, due to its damping properties, provides significantly better sound insulation than 4 layers of the same sheet material, but mounted without the use of SR-GLUE.