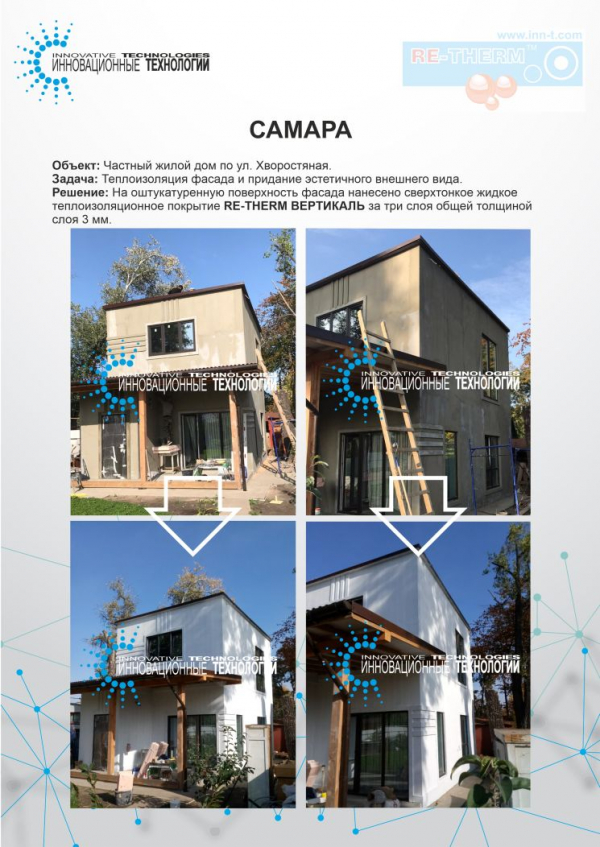 Thermal insulation work is one of the most difficult types of construction and installation work. As a rule, from design, choice of material and method of insulation and ending directly with installation, such work is performed by high-level professionals.

This example shows the facade of a private residential building in Samara, which was previously plastered, but the resistance to heat transfer of the enclosing structures did not reach the standard values. The solution to this was the application of a thermal insulation layer of RE-THERM over the plaster with a layer thickness of 3 mm.

This method of thermal insulation provides several functions at once - bringing the heat transfer resistance up to standardized indicators, creating an aesthetic appearance and, thanks to its waterproofing properties, extending the service life of the plaster layer several times. Ultra-thin liquid thermal insulation RE-THERM, applied to the surface of the facade, does not need additional protection from the weather. In this particular case (with thermal insulation of a private residential building in Samara), the composition was used in a basic white color, however, at the request of the customer, the RE-THERM heat-protective coating can be tinted in any color according to the RAL palette, which also saves the customer's money for finishing painting.

It will not be superfluous to note the fact that the work on thermal insulation can be performed not only by a highly qualified specialist, but also by the owner himself, who knows how to use standard painting tools - a brush or a roller. On large surfaces, a high pressure spray gun can be used.