R-COMPOSIT RADON is an effective tool to combat the ubiquitous killer gas. This applies to everyone. 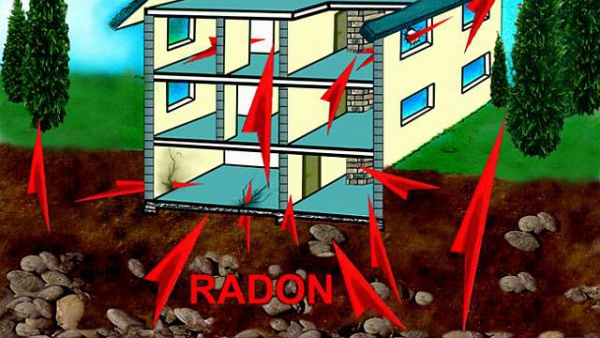 We start the article with a story about gas, the presence of which is detected only by devices created to fix it, and medical workers, including oncologists, are able to detect its consequences. This gas has neither taste, nor color, nor odor; in various concentrations contained in all building materials (the lowest concentration in wood), perfectly soluble in water. This gas has a high chemical activity and is highly radioactive. This article is about Radon gas (Rn222).

The harmful effects of gas Radon was first discovered in mining mines. Miners often suffered from respiratory diseases, and at first doctors believed that this was due to the increased content of coal dust in the air in the mines, but later it was found that the cause was radioactive Radon 222. Further studies showed that this gas is formed in the earth crust in the decay of Radium 226 and is present everywhere in all rooms, and especially in the basement and on the first floors of buildings. The concentration of this gas in different regions of the globe is different. The highest concentration of Radon 222 in the air occurs where there are faults in the upper crust (North-West region of Russia, the Urals, the Caucasus, the Altai Territory, the Kemerovo region, etc.). A map of the radon-hazardous regions of Russia can now be found on the Internet, as well as on the website www.inn-t.com.

“The global radiation - hygienic significance of the problem of the natural radiation background of the Earth is due to the fact that natural sources of ionizing radiation, and above all radon isotopes and their short-lived daughter products in the air of residential and other premises, make the main contribution to the exposure of the population. The values ​​of doses from natural sources largely determine the radiation situation in the region. In this case, the radiation dose of small groups of people can exceed the average levels dozens of times. Almost everywhere, the greatest contribution to the total dose is made by radon isotopes (222Rn - radon and 220Rn - toron) and their short-lived daughter products (DPR and DPT), which are in the air of residential and other premises ... "- explanatory note to the "Federal Target Program to Reduce Exposure population of the Altai Territory at the expense of natural sources of ionizing radiation (RADON)”.

The fact is that about 55% of cases of radiation damage to the population of the Earth are not connected with the use of atomic energy, not with testing of nuclear weapons and not with accidents at nuclear power plants, but with the inhalation of radon. Among non-smokers, the number one cause of lung cancer is radon, among people who smoke, radon is in second place as the cause of lung cancer. The reason for such a strong impact of Radon 222 on the human body is that it radiates alpha waves that cause maximum harm to living organisms.

Researchers of the enterprise “Innovative Technologies” in Kazan, together with scientists from Kazan institutes, developed a coating that contains megnesite and shungite. Magnesite is a natural mineral, magnesium carbonate (MgCO3), used to purify water and various gases, including air. Shungit is a specific rock named after the Karelian village of Shunga on the shores of Lake Onega. There is its only deposit. The breed is almost 2 billion years old. Shungite effectively absorbs poisonous impurities from water, from biological fluids, and also from gases, including air. The unique properties of schungite for a long time have not been explained. As it turned out, this mineral is mainly composed of carbon, much of which is represented by special spherical molecules - fullerenes. Fullerenes were first discovered by laboratory when trying to simulate the processes occurring in space. And this new, third (after diamond and graphite) crystalline form of carbon existence in nature was discovered by American scientists in 1985.

For the Russian Federation, the limiting Radon concentration in the air of a residential and working area in rooms is 100 Becquerels. Often, this figure is exceeded not only at times, but tenfold. Moreover, radon MPC is often exceeded in the air in buildings that are not located in radon-hazardous zones - here it’s a matter of the soil features, the materials from which the building was being constructed, etc. The main danger of Radon 222 is for children, since it is heavier than air and "creeps" is usually closer to the floor in the room. Radon 222 content in the air can be measured using a special device - radonmeter.

A common problem is the use of unsuitable raw materials in the production of building materials. For example, if a quarry in which clay is mined for the production of expanded clay or ceramic brick is located in the fracture zone of the upper crustal layer (and this cannot be determined with the naked eye), the brick and expanded clay produced from this clay will release radon. Studies show that sometimes the excess of the Radon 222 level is fixed in the air of residential premises even on the 7th, on the 8th ... on the 10th floors. This may be due just to the radon content in the building materials of which the building is constructed. In such homes, people, especially children, can often suffer from respiratory diseases, general weakness, reduced immunity, and the like. If on the walls of a similar house, emitting radon, from the inside, apply R-COMPOSIT ™ RADON coating, its penetration into the air will be practically eliminated. At the same time, the coating is environmentally friendly, breathable, elastic, does not contain any organic solvents, it can be washed with soap. In addition, R-COMPOSIT ™ RADON, applied to a non-combustible wall surface (brick, concrete, plaster, etc.) does not burn, thus not increasing the fire hazard of the room.