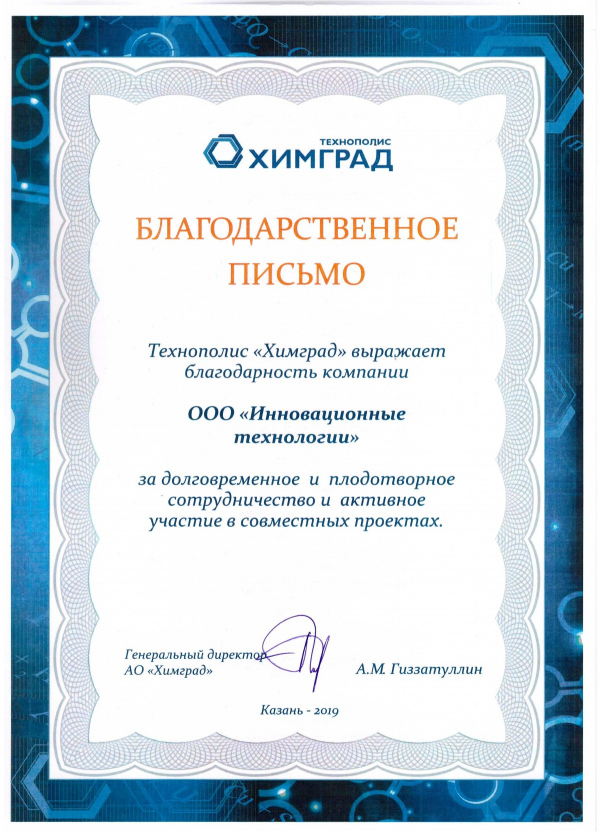 At the end of December 2019, a traditional meeting of residents took place in the administrative building of Technopolis “Khimgrad”, in which the management of “Khimgrad” JSC, as well as invited guest speakers, took part. In addition to a general debriefing, plans for 2020 and current issues on promoting the products of Tatarstan manufacturers in the Russian and international markets were discussed.

The program of the meeting implied not only the formal part, but also the informal communication of the participants. For residents, special government support measures are in place, which were discussed separately by invited speakers. The new members of the Chamber of Commerce and Industry of the Republic of Tatarstan were awarded membership cards, which are confirmation of joining the club of Tatarstan entrepreneurs. And the solemn part ended with the presentation of letters of thanks to the most active residents of Technopolis, among which was our company. Recall that LLC “Innovation Technologies” has been a resident of Technopolis “Khimgrad” since 2017.

Today, the total number of residents is 300 companies, and every year their number is only growing. This is not surprising, since Technopolis “Khimgrad” is the leader in the all-Russian rating of investment attractiveness of industrial parks and SEZs in 2017-2018. Developed infrastructure, accessibility of communications, modern approaches to solving typical problems are the factors that distinguish “Khimgrad” JSC from similar industrial parks.

View the embedded image gallery online at:
http://en.inn-t.com/novosti/item/368-innovative-technologies-llc-took-part-in-the-final-meeting-of-residents-of-technopolis-khimgrad-in-kazan#sigProId4ae45607e5
Back to list